Listen to Gig expert Marianne Olsson on the Gigapod about Gig work in time of Corona. 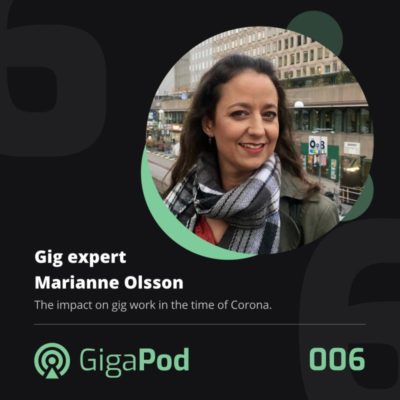 Marianne Olsson, Gig expert and Strategic Advisor, shares her thoughts on the impact of the Corona virus on gig work and the potential opportunities that can result as part of the upheaval.

She also talks about her perspective on the future of work and how all workers could be seen as gig workers.

If you’re not familiar with Marianne yet, she is a published author with 10 books, mostly focusing within the Gig economy. Marianne describes herself as a Gig worker at heart and has run her own business since 2001.

The Gigapod
By Gigapod powered by Gigapay.co
Gigapod is a podcast which explores exciting business models within the sharing, gig and circular economies. We meet with founders and operators, on how they achieve growth, whilst they responsibly scale.

Marianne Olsson in interviewed by Raiha Buchanan. She is the founder of the Gigapod and as well as the WIFTN Podcast – a Global Podcast for Women in Fintech.