Marianne Olsson writes about innovation in Sweden, that has a growing gig and sharing economy market. Go to the article!

The gig market was already booming in Sweden, and corona has increased the pace of change in an already mature freelance and gig marketplace. Sweden is also a global innovation leader, producing a disproportionate number of unicorn businesses including Skype, Spotify and SoundCloud. The 2019 Global Innovation Index placed Sweden second in the world. Since 2001 I have surveyed and identified major changes in the Swedish job market, and in this article I look at the factors that have enabled my country of just over 10 million people to achieve its global-leading status.

The gig economy is in many ways interconnected with entrepreneurship and innovation since it has become popular among startups to either finance their venture through their own consulting services or gig work, as well as utilize the flexible gig workforce to grow their young companies dynamically. In many economies, new generations joining the workforce are less inclined to seek traditional full time employment, and instead use gig work as a way to gain new experiences and build their work resume. In Sweden more than 70% of all companies are solo entrepreneurs, and evidence shows they are taking on multiple roles.

According to the AppJobs Institute’s (www.institute.appjobs.com) recent research, 53% of Swedish gig workers in Stockholm work over 30 h/week, 41% between 10-30 h/week and 4% less than 10 h/week. This indicates that gig workers have several different gigs combined. Some roles are through online platforms, others include non-platform freelancing and consulting (remote or on site), and temporary work opportunities provided by staffing agencies. All of this is positive since it spreads risk and creates a more flexible and sustainable lifestyle in terms of work life balance. The old separation between blue and white collar is also slowly being erased, with gig workers moving between different kinds of work to support themselves.

How has this been achieved, and what will keep Sweden ahead of most of the rest of the world? Several societal and educational factors contribute to it.

Trust is very important in the gig economy, particularly in instances where task creators and service providers are unlikely to ever meet.

The economist Lars Calmfors has examined what distinguishes Sweden, Norway, Denmark, Finland and Iceland from other countries around the world. One key aspect is that four of these five countries enjoy the highest levels of social trust in Europe.The Nordic region is regarded as a world leader when it comes to social trust among its population.

The high level of trust in the region is often referred to as Nordic Gold. One significant explanation for it, and one that has had a positive effect on the economy, is that the state works in a transparent and fair way, with a high degree of integrity, which generates positive effects.

To put its value on a tangible basis, Christian Bjornskov at Aarhus University reviewed empirical studies and calculated that an increase of ten percentage points in social trust can be expected to increase economic growth in a country by half a percentage point.

European Commission research findings in 2018 show Sweden to be one of the most advanced digital economies in the European Union alongside Denmark, Finland and the Netherlands.

For around the last 20 years, Swedish workers have enjoyed a statutory right to take six months off and start their own business. It’s one of the reasons the country’s capital, Stockholm, has become Europe’s start-up capital, second only to California’s Silicon Valley for the number of unicorns (billion-dollar tech companies) that it produces per capita.

However, through my advisory company Konsultboken, there is one major difference I have to emphasise to everyone.

The gig year is 9 months!

Adapting to new ways of working also requires each and every individual to take charge of their own financial lives and actually plan an annual budget to schedule work and pay or invoicing amounts to get by. This is why hiring companies need to understand that it is crucial for gig workers to get a margin and receive “risk compensation” for not having a steady job and taking on the responsibility to get new gigs themselves. This is why I strongly believe that minimum wages or hourly prices will be stable and/or increase and those who work hard, get good ratings on the platforms and marketplaces or recommendations from their customers, will get paid and compensated accordingly.

For freelancers like consultants that work remote or on site, nine months is about how much time you can expect to be booked for work on an annual basis. This naturally depends on which industries you serve and what services you offer, but if you allow for bank holidays, vacation time, training and personal development, sick leave for you or your family, and potential customer loss (planned gigs that get cancelled ahead of time) there will only be nine months of work left. This means that gig workers need to earn a salary or invoice enough for your gig work so that it can support you for a minimum of twelve months. Preferably for longer, since you work in an environment with strong uncertainty and is a need for contingencies like a money buffer.

To close, in a global crisis like the impact the corona pandemic has had, I would expect to see an increase of work across the value chain where someone like an out of work IT consultant compensates his or her work loss with working through gig apps. This flexible kind of thinking and behaviour is something we will see more of as the new normal moving forward. 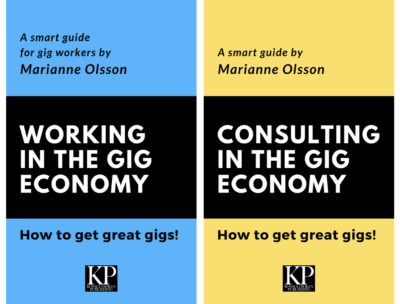 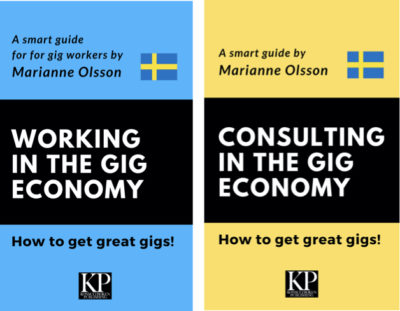 Books at Bokus in e-pub format

Marianne Olsson is a true generalist and has been a strategic advisor and managing her own consultancy Konsultboken for almost 20 years. In a way she is a pioneer in this space since she has promoted gig and freelance work since. Her first books were written in order to strengthen gig workers and consultants in their workplace, develop skills and traits as well as create an understanding about the market for both purchasers/customers and the gig workers. Her latest books are titled Working in the Gig Economy & Consulting in the Gig Economy – How to Get Great Gigs. To date she has authored more than 10 management books and co-authored a book series about Smart PR for startups, gig workers, and authors.